dQ⁄dt = rate of change of the substance

Q = amount of the substance present at any time t

The equation is separable so we need to separate the DE first.

Now, we will be going to integrate both sides of the equation.

After integrating, we’ve got

This will be our general equation.

In our given, when our t = 0 the amount of substance present is 100 mg. So here we will use the given to find for the value of our constant. By substituting the given to the equation we’ve got

Now that we’ve got the value of C, we next need to find the value of k. In order to see that, we let out time equal to 100 years and the amount of substance present is 96 mg. substituting from our derived equation, we’ve got

Now that we’ve found the value of our C and k, we will be able to find the amount of mg after another 100 years. So here is our t=200. By substituting the given value to the equation we have

Newton’s Law of Cooling states that the rate of change in temperature should be proportional to the difference between the temperature of the object and its surrounding temperature.

Substitute the value of C in the given equation.

This will give us the formula for Newton’s Law of Cooling.

Let’s have this example.

Let’s first identify the given.

340°k = temperature of the substance after 15 minutes

370°k = original temperature of the substance

310°k = temperature of the substance at t

After we identify the given, we need first to know the value of k. So substitute the given to the derived formula.

What we are finding here is the value of k so we are going to get its natural logarithm.

Given the equation of a parabola 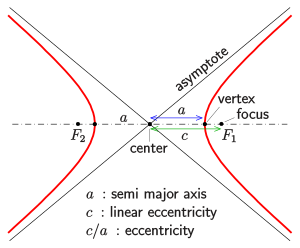 The curves are then sideways parabolas with equation

which still depends on the constant p.

Since there is still an arbitrary constant which is p , we need to get its second derivative using implicit differentiation for the second time

This last equation does not depend on the constants h  and p.
The desired differential equation is

We live in the age of astonishing advancement. Engineers can create robots, physicist can describe the motion of waves, pendulums or chaotic systems, while we communicate wirelessly in a vast world wide network. But underline this modern wonders, are deep and mysteriously powerful, called Differential Equations. But what are differential equations? Where does differential equations come from? And why does they work so well in a vast discipline such as biology, physics, chemistry, economics, engineering, etc… Why are they not generally observed in our daily lives?

Differential equations are equations that contains one or more terms involving derivatives of one variable (dependent variable) with respect to another variable (independent variable) or we can say that these are equations involving derivatives of a function or functions. They have a remarkable ability to predict the world around us. They are used to describe exponential growth and decay, population growth of species or the change in investment return over time, bank interest, even in solving radioactive decay problems, continuous compound interest problems, flow problems, cooling and heating problems, orthogonal trajectories, and also in investigating problems involving fluid mechanics, circuit design, heat transfer, population or conservation biology, seismic waves. They are used in specific field such as, in the field of medicine, where differential equations are used for modelling cancer growth or the spread of disease. In chemistry, they are used for modelling chemical reactions and to computer radioactive half-life. In economics, they are used to find optimum investments strategies. In physics, they are used to describe the motion of waves, pendulums or chaotic systems. They are also used in physics with Newton’s Second Law of Motion and the Law of Cooling that pertains to the temperature of objects and its surroundings. In engineering, they are used for describing the movements of electricity. Differential equations are also used in creating software to understand computer hardware belongs to applied physics or electrical engineering. They are also used in game features to model velocity of a character in games. They are essential tools for describing the nature of the physical universe and naturally also an essential part of models for computer graphics and vision. Differential equations are also used as aspect of algorithm on machine learning which includes computer vision. Also involves solving for optimal certain conditions or iterating towards a solution with techniques like gradient descent or expectation maximization. In Mother Nature, differential equations are essential tool for describing the nature of the physical universe. Even in networking, they are used to understand an outcome of an edge creation model like preferential attachment which says the nodes with probability proportional to their existing degrees. And also used in theories and explanations like using a determinants to estimate the area of the Bermuda triangle. Even in Bots (short for robots), partial and ordinary differential equations helps to provide shapes and interior and exterior designs of machine.

With their broad and advance uses, no wonder why some people found it difficult. However, with their remarkable ability, people spend their time and effort analyzing and describing their behaviors. Some people spend their youths exploring and mastering its concepts and digging dipper on it, exploring its mysteries. It is indeed challenging and worthwhile knowing its characteristics and behaviors, playing a major role in our environment, that’s why everyone of us should appreciate them.

Thanks for joining me!